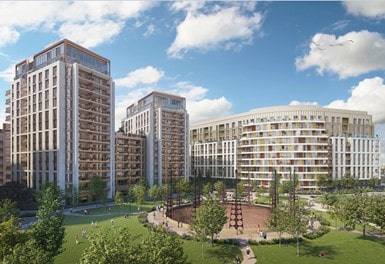 Riverstone has forward purchased the site from St William, part of the Berkeley Group, and plans to welcome its first residents in 2026. There will be a mix of one, two- and three-bedroom apartments and penthouses.

At Riverstone King’s Road, 25,000 sq. ft. of amenity space designed by Bowler James Brindley will be delivered including a restaurant, bar, club room, library, swimming pool and spa, a gym designed for physiotherapy and rehabilitation, an exercise studio, espresso bar and cinema.

The amenities will form part of The Riverstone Club, which provides residents with access to all Riverstone’s residences across London.

For residents who require assistance and support to continue living independently, The Good Care Group at Riverstone will be available.

“Riverstone is establishing itself as a provider of exceptional residences in prime central London and central to our ethos is creating places where people continue to live active, independent, and sociable lives.

“The King’s Road site is in an incredible location and our residence will be an exemplary offering. There is strong demand for this form of later living, which is only set to increase given the growing population of over 65s in the UK.”

Riverstone currently has four residences in Kensington, Fulham, Hampstead and The King’s Road.