Columbia Property Trust, Inc. announced that it is under contract to acquire 201 California Street, a 272,000-square-foot, Class A office tower in San Francisco’s Financial District, from Beacon Capital Partners for $239 million, exclusive of closing costs. The acquisition is expected to close by year-end.

Located at the corner of California and Front Streets, the 17-story building has been substantially renovated and is 97 percent leased to multiple tenants, the largest of which are First Republic Bank, Dow Jones, and the law firm Cooper, White and Cooper.

The building has substantial roll over the next five years, with in-place rents estimated to be at least 10 percent below market, giving Columbia an opportunity to take advantage of continued demand in the market and drive further growth in rental rates.

“We are very pleased to be putting the proceeds from our dispositions to work by adding another exceptional asset to our San Francisco portfolio,” said Nelson Mills, CEO of Columbia.

“With its highly desirable location, amenities and structural attributes, 201 California is positioned to perform in line with our other successful investments in the Bay Area, and we look forward to the opportunity to put our local knowledge and capability to work to improve rates even further at the property in the years ahead,” he added. 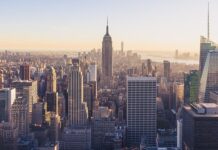